“The oceans need protection – our lives depend on them”

One of the world ́s most innovative researchers into the future of the oceans and marine life, Professor Rashid Sumaila, receives the Volvo Environment Prize for 2017. He is an economist who has challenged traditional ways of marine governance and has introduced new ways of thin- king, such as protecting the high seas as a “fish bank” for the world. 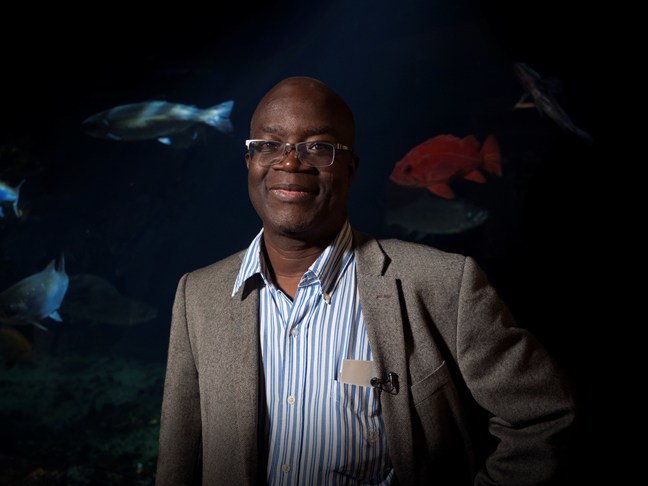 Professor Rashid Sumaila is Director of the Fisheries Economics Research Unit, Institute for the Oceans and Fisheries at the University of British Columbia, Canada. Scientists here have been compiling statistics for years, clearly demonstrating that the global fish catch has stalled and is now falling, despite increased efforts from fishing fleets all over the world.

– There is clear scientific evidence, supported by reports from fishermen all over the world, that we are currently taking out too much fish. We are overfishing, depleting our resources, says Rashid Sumaila.

The world’s oceans, covering 70 per cent of the surface of the planet, were once seen as an infini- te supply source for humans to use. But they are under strong pressure. Global fisheries catch is about 130 million tonnes of fish a year, caught both legally and illegally.
It is a huge business, with an economic impact of about USD 500-billion a year, providing much- needed protein for billions of people and jobs for tens of millions. With global fish catch now in decline, both the business and food security are threatened.

Rashid Sumaila’s research covers all aspects of the future health of the oceans: overfishing, oil spills, plastics pollution, ocean acidification and climate change. But he also provides solutions for managing the marine biosphere. One of his suggestions is to close the high seas to commerci- al fishing.

The exclusive economic zones outside coastlines are usually guarded and monitored by individu- al countries. But the high seas cover two thirds of the world’s oceans. They are owned by everyo- ne and no-one, which means they are up for grabs – and undefended.

“If we were to protect the high seas, we would create areas where the fish can hide and grow.”

Rashid Sumaila has suggested a total ban on fishing in the high seas, an idea initially seen as totally unrealistic. This has changed and the first high seas marine protected area, the Ross Sea in Antarctica, will come into force by 1 December 2017. He has been invited to present his idea to the United Nations, the Global Ocean Commission and the American Association for the Ad- vancement of Sciences.

– If we were to protect the high seas, we would create areas where the fish can hide and grow. Fish can later seed the economic zones of countries. This will improve not only the marine biodi- versity but also the economics, says Rashid Sumaila.

Another of Rashid Sumaila’s research areas is subsidies to fishing fleets. He finds them mainly harmful and a factor behind overfishing. Through calculations, he and other researchers, looking globally, estimate it would be necessary to substantially cut down the current fishing fleets.

– The science shows that this is what we need to do. If you want to rebuild, you need to pull back. If we allow the fish stocks to grow again, we can start to fish more and support people around the world with healthy animal protein. To say that the oceans are our lives is not an understatement: They need protection and how we treat them will have a profound impact on current and future generations.

The motivation of the jury of the Volvo Environment Prize Foundation:

“Professor Sumaila is one of the world’s most innovative researchers on the future of the oceans, integrating the social and economic dimensions with ecology, law, fisheries science and traditio- nal knowledge to build new pathways towards sustainable fisheries.
He is a highly effective, strongly interdisciplinary researcher tackling one of the most complex global sustainability challenges of the 21st century.”

This is echoed by the President of the University of British Columbia, Professor Santa Ono:

– We are incredibly proud of Professor Rashid Sumaila. He is not only one of the most cited sci- entists, he also has the ability to bring science to life, to get everyone from children to laymen to experts interested in sustainability, climate change and the economy of fisheries, an area which he has pioneered.

Professor Rashid Sumaila is one of the world’s most innovative researchers on the future of the oceans, integrating the social and economic dimensions with ecology, law, fisheries science and traditional knowledge to build novel pathways towards sustainable fisheries. His work has challenged today’s approaches to marine governance and generated exciting new ways of thinking about our relationship to the marine biosphere, such as protecting the high seas as a ‘fish bank’ for the world and using ‘intergeneration discount rates’ for natural resource projects.

Professor Rashid Sumaila takes an innovative, highly interdisciplinary approach to his research on the future of the world’s fisheries, triggering a rethink of society’s approaches to marine governance. He works with the real-world economy from local to global scales in both developed and developing countries, with a focus on equity and local livelihoods. His work has tackled a broad range of challenges at the interface of economics and ecology – use of marine protected areas as management tools; meeting the threats of oil spills, ocean acidification and climate change; and confronting the contentious issues of illegal fishing and subsidies to fishing industries. Professor Sumaila is relentlessly active at the science-policy interface, bringing his expert scientific knowledge into policy and governance discussions through collaboration with NGOs, national governments, and international organizations such as the United Nations, the African Union, the OECD and the World Trade Organization. He has taken his expertise to all corners of the planet, from presentations at the European Parliament to support for people of Ogoni in Nigeria whose fisheries were devastated by repeated oil spills. Open-minded and engaging, Professor Sumaila is known not only as an excellent communicator, but also as a good listener. In summary, Professor Sumaila is a highly effective, strongly interdisciplinary researcher tackling one of the most complex global sustainability challenges of the 21st century.